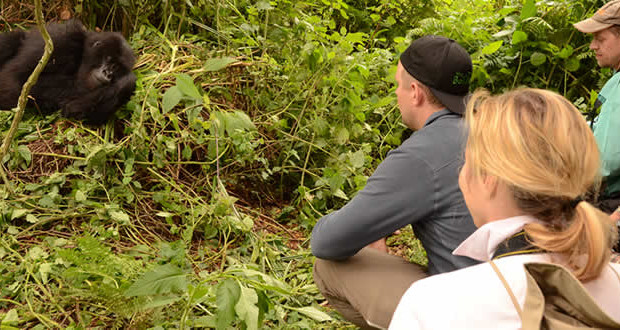 With 10 habituated mountain gorilla families in Volcanoes national park, at least 80 people can trek mountain gorillas in Rwanda on a daily basis. A single gorilla permit in Rwanda goes for 1500 USD, of which some of this revenue goes towards mountain gorilla conservation and research while some potion is ploughed back into the local communities neighboring the volcanoes national park. It should be noted that the lands neighboring the park borders are densely populated with high poverty levels. This income is very instrumental in general improvement
Presently, Rwanda a umber of initiatives have been put in place to ensure the co –existence of gorilla tourism and conservation and these include:

The Rwanda development board (RDB), a government body responsible for tourism and conservation in Rwanda does Monitoring and research in the national park. Research centers such as the karisoke help to educate communities on how to conserve the mountain gorillas and the benefits of conservation. This has developed a positive attitude of the local people towards conservation hence decreasing poaching and attracting back gorilla tourism and conservation.

Due to the various threats such as loss of habitats, diseases and poaching, The Rwanda development body (RDB), has put in place laws to guide tourism in the national park. During the 1990’s civil wars in Rwanda, many people fled to the national park in search of refuge, which increased the spread of human wildlife diseases. People in search for food and sale killed more mountain gorillas putting tourism at a stand still.
Presently, people have been taught how to interact with the mountain gorillas at a distance hence conservation in the volcanoes national park.

Most importantly, the Rwanda development board (RDB) has focused much on improving the standards of the local communities. The densely populated local communities who depend entirely on agriculture for a livelihood surround volcanoes national park and had always encroached the park for land.

The Rwanda development board has introduced the community conservation program in the national park were part of the revenue earned from tourism is given back to the local people. This sharing of the benefits has helped to balance the needs of the local people while conserving wildlife for the future.
Water tanks, schools and other developments have been put in place to support local people. For example local people no longer walk o the forest to collect water, which has improved their health and standards of living.

In conclusion, there are only 3 destinations to visit gorillas in Africa – Rwanda, Uganda and the Democratic republic of Congo who share boundaries have signed a memorandum of understanding. The trans boundary collaboration has been encouraged between the three countries and there are no physical boundaries. Mountain gorillas some times cross over to the neighboring countries. This has helped to promote tourism ad conservation in the virunga massif.

Rwanda is the best gorilla tourism destination in the whole world. The country has put I place the above initiatives and presently tourism, local communities and conservation co-exit harmoniously in the country.