Golden monkeys in Rwanda live in the bamboo vegetation towards the base of the volcanoes and habituation has helped them to overcome their initial shyness to accept their daily visit by researchers and tourists. Trekking golden monkeys and gorillas is a similar experience – in a small group of no more than eight people, and you can spend one hour with the monkeys once you find them. The endangered species are very active creatures, and jump from tree to tree which is really interesting and a little difficult to photograph! 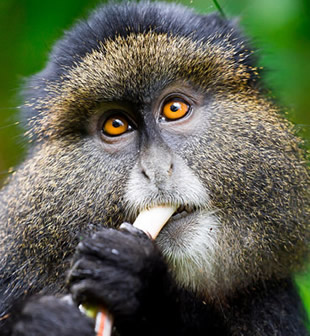 The golden monkey trek is worth going for while in Volcanoes National Park and if you’re interested in wildlife, this is a rare and delightful experience not to be missed!. Besides Volcanoes national park, the other population of golden monkeys reside in Mgahinga gorilla national park in Kisoro district, south western Uganda.
How much is a golden monkey permit?
Just like in mountain gorillas, Travelers to see golden monkeys are required to buy permits which allow them to access and spend an hour with these amazing creatures. Fortunately, golden monkey permits are quite cheap costing $100 per permit in both Uganda and Rwanda. permits are bought from Rwanda Development Board (RDB) in Rwanda and Uganda Wildlife Authority (UWA) in Uganda.Travelers are reminded to book for permits at least 3 months before the trekking date to secure permits and ensure timely planning. The cost of a golden monkey permit involve park entry fees, ranger fee and government taxes.

How long does it take to reach golden monkeys?
The time to spend in the jungle is not specific. It can be as short as 3o minutes to several hours depending on the speed of movement for the monkeys. However, golden monkeys do not go into higher altitudes like gorillas hence sparing travelers several hours of hiking.