A hike to Dian Fossey tomb has presently become a not miss on every Rwanda safari to Volcanoes national park. Dian Fossey was an American primatologist and anthropologist who committed her life to the conservation of the Mountain Gorilla by conducting an 18 year comprehensive study about the fateful ape. Having been raised with dejection and lack of parental love from the step father following her mother’s divorce with her father, Dian found love and comfort with the animals. At the age of six, Dian Fossey 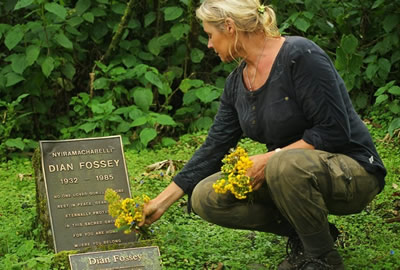 horse raiding before she worked on a farm with of her hospital friend after graduating with a bachelor’s degree in Occupational Therapy from San Jose State College in 1954. With the support and funding from Louis and Mary Leakey who were operating anthropological research in Olduvai Gorge in Tanzania, Dian found her way into Democratic Republic of Congo where she established her camp at Kabara to begin her study about the mountain gorillas in 1967.

On July 9, 1967, soldiers arrived at the camp to escort her and her research workers down, and she was locked up at Rumangabo for two weeks. Fossey eventually escaped through bribery to Walter Baumgärtel’s Travelers Rest Hotel in Kisoro, where her escort was arrested by the Ugandan military. With the advice from Leakey, Dian gave up going back to Congo and started her research on the Rwandan side of the Virungas where she established her camp at a place between Mt. Karisimbi and Visoke, which was to later be known as Karisoke after combining the two names, Karisimbi and Visoke.

On September 24, 1967, Fossey founded the Karisoke Research Center, a remote rainforest camp nestled in Ruhengeri province in the saddle of two volcanoes (Visoke and Karisimbi) at an elevation of about 3,000 meters (9,800 ft) up Mount Visoke and covering an area of 25 square kilometers (9.7 sq mi).
Unlike the mountain gorillas in Congo, the Rwandan mountain gorillas had never been habituated and only knew humans for poaching which made them fearful to human presence hence making it had for Dian to study them at close range.

She started anti-poaching campaigns with a team of her staff, who would carry out patrols rescuing some of the gorillas whose parents were killed during the raids. The gorillas in her study range soon got protection as those in the western side of the park where she was not reaching continued to suffer the plight. Elephants were also hunted from the same forest for their ivory until when they were almost no more.

Dian was later known by locals as Nyirmachabelli, or Nyiramacibiri, that was directly translated as “the woman who lives alone on the mountain’. Her work went on well and she soon found favor and friendship with the mountain gorillas where she befriended a silver back known as digit. The death of Digit in 1978 was a big blow in Dian’s heart after digit was short as he was trying to protect a baby gorilla known as Kweli from poachers.

Digit was buried at the camp at the Karisoke Research center but Dian’s patrol efforts were strengthened as she attracted public sympathy and started getting support from international society through international bodies like African Wildlife foundation, the World Wildlife Fund, Fauna Preservation Society and the Mountain Gorilla Project, which Dian blamed for not actively engaging in conservation through anti-poaching patrols.

Dian Fossey’s anti-poaching patrols led to the arrest of many poachers who were sentenced to jail and some are still serving their sentences. Dian was murdered in 1985 in her tent at her research institute by unknown murders where she was found lying in a pool of blood in the early morning of December 27, 1985.

Fossey is buried at Karisoke, in a site that she herself had constructed for her deceased gorilla friends. She was buried in the gorilla graveyard next to Digit, and near many gorillas killed by poachers. Memorial services were also held in New York, Washington, and California.

Go hike the Dian Fossey grave as a tribute to her great work of protecting the Volcanoes mountain gorillas which today are still existing and your able to come see them. Very advisable to go do the tomb hike the day after your gorilla safari in the Volcanoes Forest.