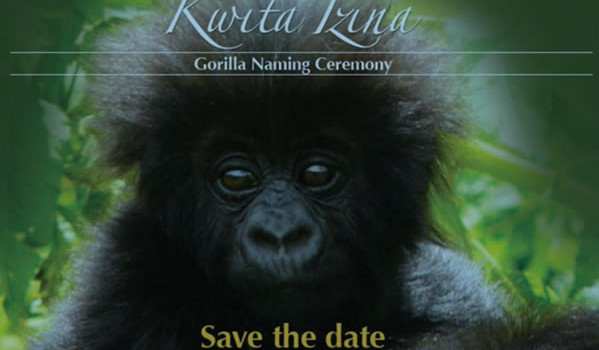 This year at the Kwita Iziina – also called the gorilla naming ceremony of Rwanda, 13 baby gorillas will be named.The 12 year old gorilla naming ritual was started in 2005 by the Rwanda Development Board as means of creating awareness of mountain gorilla conservation in Rwanda and recognizing the collective efforts of the local communities surrounding the national park of their role and efforts to protection of gorillas and the need for support development programs
The communities living around the conservation areas have benefited from the growth of the tourism sector. In a report from Jean Claude Musabyimana the Northern Province Governor; the revenue sharing model has seen local communities receive improved infrastructure, quality healthcare and better education facilities, which has encouraged them to champion communal conservation efforts.

This year, two community projects in education and one in healthcare will be launched under the revenue sharing scheme. Akagera primary school, Nyungwe National Park and the second phase of Gihorwe Health post in Kabatwa sector. The above projects have been in developing process since 2013, with more community projects coming up to transform institutions into 12 year basic education schools as well as fully equipped and operational health post

Early this year, Rwanda safaris have collected over $444 million almost Rwf370 billion from $404 million last year. Starting May, Rwanda gorilla permit prices have gone up from previous $750 to $1500 which has been received with mixed reactions. In Rwanda Gorilla tracking remains among the top tourism attractions in the country.

According to Belise Kariza the chief tourism officer RDB, gorilla tourism in Rwanda has seen some high cost investments alongside other ambitious tourism development goals such as the Bisate Lodge by Wilderness Safaris in Kinigi, which will be launched this year. Singita Luxury African Safari Lodges Reserves, is expected to open their facility in 2019
New infrastructures is a direct benefit to the rural communities interns of employments, communal involvement and trainings.