Gorillas in Uganda can be watched in Bwindi impenetrable national park and it takes one long day of driving to reach from Entebbe. Alternatively to cut the distance, one can opt to track the bwindi gorillas from Rwanda crossing to Kisoro via the Cyanika border only 1 – 2 hours drive. From Kigali the shortest possible tour is a 3 days gorilla tour in Bwindi with 3-4 hours drive crossing from Rwanda and overnight in Bwindi forest.

In comparison to the attractions in the two countries, Uganda is a larger country with many wildlife add on activities to explore than Rwanda. Once at Bwindi via Entebbe, we would recommend two nights before continuing your gorilla safari to explore the rest of the attraction on your itinerary. Bwindi Impenetrable National Park lies in southwestern Uganda on the edge of the Rift Valley. Its mist-covered hillsides are blanketed by one of Uganda’s oldest and most biologically diverse rain forests, which dates back over 25,000 years and contains almost 400 species of plants. More famously, this “impenetrable forest” also protects an estimated 320 mountain gorillas – roughly half of the world’s population, including several habituated groups, which can be tracked. 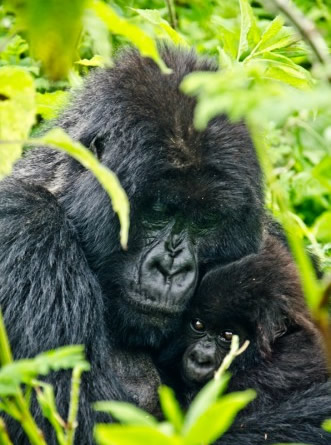 For many traveller who choose to visit gorillas in Uganda, Rwanda and Congo, conservation of the endangered mountain gorillas in the major reason they foot the high cost of a gorilla permit / pass which currently stand at $600 in Bwindi national park & Mgahinga forest in Uganda, $1500 in Volcanoes national park Rwanda and $450 in Virunga national park Congo. The chance to trek with Africa’s mountain gorillas is a once in a lifetime adventure to witness our close cousins who are indeed just like man in appearance and behavior. Gorilla trekking is a fulfilling adventure knowing that you have had the great opportunity to save the life of mountain gorillas in the wild, whose population is just recovering with increased funding from gorilla tourism.

Today, gorilla tourism is the most popular attractions in Uganda, Rwanda and Democratic Republic of Congo and is the highest revenue earner for the governments involved and hence is managed strictly so as to benefit the gorillas in the jungle as well as the communities in the countries where gorillas are found. Daily departures going for gorilla tours in Bwindi are organized by trusted safari companies

There are 11 habituated gorilla groups in Uganda (10 for tourism and 1 for research) and none tend to be found near to the park entrance. These include Mubare, Habinyanja, Rushegura, Bitukura, Oruzogo, Nkuringo, Nshongi, Mishaya, Kahungye, Bweza, Busingye, Nyakagezi and the research group Kyaguriro. With approximately 400 mountain gorillas living in the impenetrable forests, Uganda is home to more than half of the world’s total population of mountain gorillas. The majority is found in different areas of Bwindi Impenetrable National Park, a UNESCO World Heritage Site and one of the most popular tourism destinations in Africa. A small number lives on the lower slopes of the volcanoes in Mgahinga National Park. 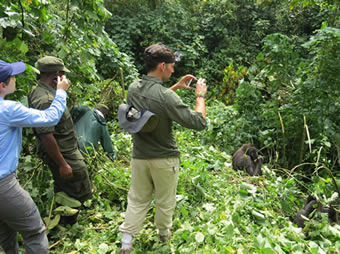 Uganda’s Bwindi impenetrable forest is a perfect destination for gorilla tours though be aware of the terrain in Bwindi that involves trekking at the top of the hills, descending on foot into the valley to see the gorillas, and then climbing up the slopes at the end of the day, which can be more arduous.

The following are the habituated gorilla groups in Bwindi;

Ruhija Section of the park
Bitukura Group
Recently habituated gorilla group in Ruhija part of the park. One of the best groups to go for in this region comprising of four silverbacks with Ndahura the second youngest silverback as the leader. Notwithstanding the dominant male, the silverbacks move together alongside 2 blackbacks of this same group. The silverbacks, Rukara and Rukumu associating the 2 blackbacks, Obia and Mugisha are a big spectacle when there is a fight among them.

Oruzogo Group
Visit this group in Ruhija area and have a chance to interact with 23 gorilla members including a Dominant Silverback, 1 sub-Silverback, 5 Black-backs, 7 Adult Females, 4 Juveniles and 5 Infants.

Southern Section of Bwindi national park
Nkuringo Group Located in Nkuringo
Located in the southern part of Bwindi, Nkuringo has a Dominant Silverback, 3 sub-Silverbacks, 3 Black-backs, 3 Adult Females, 3 Juveniles and 4 Infants. It has 17 members in total.

Nshongi Group located in Nshongi/Rushaga
With 21 members, Nshongi has a Dominant Silverback, 2 sub-Silverback, 3 Black-backs, 6 Adult Females, 6 Juveniles and 3Infants and it can be tracked in the southern sector of Bwindi.

Mishaya Group located in Nshongi/Rushaga
Interact with 7 members of Mishaya group including a Dominant Silverback, 2 Adult Females, 1 sub-Adult and 3 Infants

Kahungye Group
It has 24 members including Dominant Silverback, 2 sub-Silverbacks, 3 Black-backs, 4 Adult Females, 3 sub-Adults, 7 Juveniles and 4 Infants. It is located in Kisoro area of Bwindi.
Before embarking on your Gorilla Safari we invite you to learn more about these incredible creatures and read interesting facts about the various gorilla families. However, keep in mind that the mountain gorillas are wild animals and details such as the group size, location in the forest and leading silverback might change without notice.

Obtain Gorilla permit
Gorilla trekking experience comes with a cost of accessing the gorilla permit. A single gorilla permit costs 600usd for foreign non-residents, 500usd for foreign residents and 250,000shs for East African citizens. This is a pass for every traveler to see the gorillas with out which no traveler can see the gorillas. In the low season between the months of April, May and Novembers are given a discount to trek at 450usd, 400usd and 150,000sh for foreign non residents, foreign residents and East Africa citizens respectively which is an added advantage. Gorilla permits are issued by the Uganda wildlife authority (UWA) a government body responsible for the conservation of wildlife and promotion of tourism in Uganda. Also, a permit can be bought indirectly through any trusted tor operator who offers gorilla packages in Uganda. All travelers intending to trek gorillas are encouraged to book for the permits at least four months in advance ad pay the booking deposit of 30% of the total cost. This is to ensure timely allocation of the gorilla families to specific trekkers and avoid confusion at the last hour. 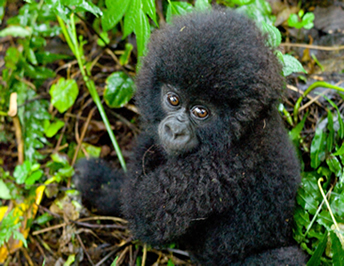 The Trekking day
On the trekking day, trekkers begin with a simple briefing by the park rangers about the do’s and don’ts while trekking. This is done at 7:00am after which trekkers hike into the forest searching and following the allocated gorilla family. A seven meter distance is a must keep by every trekker away from the gorillas to avoid close interaction. About the trekking time, trekkers spend an hour with the gorillas. However, the actual time to spend in the jungle depends on the location of the allocated gorilla family and the speed of their movements. Also, the speed of the slowest member in the trekking group determines the time to spend in the forest. The guides/rangers move at the stopped of the slowest person in the group. On reaching the gorillas, an hour is counted after which trekkers hike back to the starting point marking the end of the trek.

Dress code
Gorilla trekking require appropriate dressing. This is not in suits but in relevant attire for easy ascending and descending in the jungle The proper dressing code include rain jackets since forest weather cannot be predicted, hand gloves, long sleeved shirts and pants to avoid bites from insects, hiking boots to ease hiking in the muddy grounds and sun glasses to avoid direct sun. Proper dressing greatly assures a memorable experience.

These are not compulsory but highly recommended for every trekker. The walking sticks are bought at the briefing point and provide support in the slippery grounds whereas the porters help in carrying baggage for the travelers. More still hiring a porter at only 10 dollars is an indirect way of supporting local livelihood since the money earned is used to support their families hence improving local peoples standards of living. 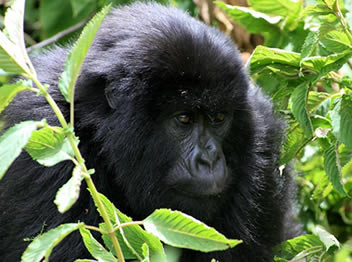 What to pack
These are not compulsory but highly recommended for every trekker. The walking sticks are bought at the briefing point and provide support in the slippery grounds whereas the porters help in carrying baggage for the travelers. More still hiring a porter at only 10 dollars is an indirect way of supporting local livelihood since the money earned is used to support their families hence improving local peoples standards of living.

Trekking mountain gorillas are not an easy venture but rather a strenuous activity that involve use of energy. Travelers are therefore reminded to pack some energy giving snacks and enough drinking water to keep them strong in the hike. Additionally, all trekkers should at least have a no flash light camera for photography.

Conclusively therefore, gorilla trekking is the best wildlife encounter that every traveler should not miss out. Gorilla trekking in Uganda greatly assures you with a memorable experience.