About vegetation cover, volcanoes national park is 30% covered by a bamboo forest (Arundinaria alpine), which spread from 2500m to 3200m above the sea level. Bamboos contain hollow and woody stems, which form the main diet for the critically endangered mountain gorillas and other animals in the park. Also, 30% of the humid slopes in south and west are covered by hagenia-hypericum forest. Other vegetation in the park includes grasslands, ferns, lichens, giant lobelia, Hagenia-hypericum, swamps, thickets, shrubs, and meadows among others. The variety of vegetation provides food and habitation for animals and birds in the national park hence enhancing tourism in the area. The most seen animals in volcanoes national park include among others:

Mountain gorillas
These are the key attraction in volcanoes national park which attract the highest number of travelers from all parts of the world. Gorilla trekking is the best wildlife experience every travel should not miss on his/her safari to Africa. 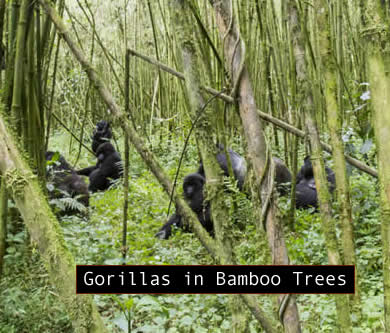 Volcanoes national park shelters over 340 mountain gorillas, which have been habituated into 10 families available for trekking. A gorilla permit in Rwanda costs 1500usd, a must have for each traveler to see these endangered species. The high cost of a gorilla permit is one of the reasons why Rwanda’s is known as a luxury gorilla trekking destination. Gorilla families in volcanoes national park include Titus family, Kwitonda family, Susa group, karisimbi family, Amahoro family, Umubano family, Sabyinyo family, Agashya family, Hirwa family, and Ugenda family all available for trekking every day. Each family is visited by a group of eight people for an hour.

Forest elephants
Volcanoes national park is also home to forest elephants. These are mostly seen during forest walk and hike to Dian Fossey grave. Much as no travelers go to the park intentionally to see forest elephants, a look at these giants is an opportunity, which adds on the final experience. Other animals to see in volcanoes national park include buffalos, black fronted duikers, bushbucks, bush pigs, spotted hyenas, black and white colobus, white colobus, baboons, and red-tailed monkeys among others.