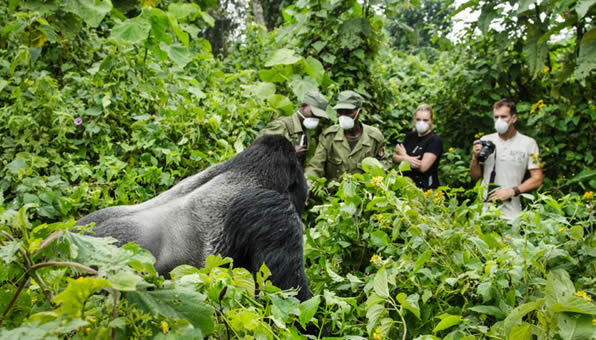 In nearly 50 years down the conservation road initiated by American primatologist Dian Fossey in Rwanda’s Volcanoes National Park, the mountain gorilla species which where at the brink of extinction, today have seen the numbers doubling from just about 240 gorillas a figure got from a census conducted around the time of Dian Fossey to over 450 gorilla species today.

With a shrinking habitat, gorillas are congested in the habitat and cannot move freely (by nature, mountain gorillas are nomads) and no longer protected by the forest boundaries because the land area is too small to accommodate the increasing number of mountain gorillas. From the analysis, gorilla population in volcanoes national park would be higher if the park area was big to accommodate the newly born babies. The death of infant gorillas in the park is a result of increased number of gorillas on a small piece of land. Visits to see gorillas in Volcanoes national park is presently under pressure as 80 people going into the limited gorilla habitat to watch gorillas in the mist impose a threat to the survival of gorillas in Rwanda.

Similarly, infant mortality rate is attributed to increased gorilla trekkers as well as human activities such as poaching and farming who scare way gorillas to higher altitudes, which are not favorable for the infant gorillas leading to death, by pneumonia. Imagine each year over 15 baby gorillas are named and new baby gorillas are continuously born yet the number of adult gorillas is not increasing. More still, when big concentration of gorillas congest in one location, dominant male silverbacks leading different groups fight each other as well as fighting the back backs and infants to take over dominance of the entire family all attributed to a lesser habitat.

To address the loss of gorilla habitat, Rwanda development board (RDB) has planned to expand the proximity of volcanoes national park to over 1,000 meters stretching from the current borders. This is probably a quarter of the current land area covered by volcanoes national park. RDB is to either buy land from communities adjacent to the park or else negotiate a long-term lease with local people currently owning the land. The expansion of volcanoes national park is along term benefit for the survial of the engendered mountain gorillas in the park as well as the local livelihoods evacuating them from poverty and poor standards of living.

Similarly, there is hope for an increase in conservation efforts with the support of the local communities. Just as it has been, local people will continue to share 10% of the total earning from gorilla tours in Rwanda even after their relocation to some model villages a distance from the park boundaries. Rwanda Development Board is to hold a round table negotiation with the current landowners to calculate the amount of money worth the land so as to buy it off.

Local people aRe to relocated to new model villages a way from the national park borders and Rwanda Development Board is to set up various infrastructures like good roads, electricity and water to improve people’s standards of living and way of living in new villages.

As of now, Rwanda Development Board has raised 60,000$ that was fundraised from the past Kwita Izina ceremony where 500 tickets were sold in a campaign to expand gorilla habitat. There are plans to buy lower plains surrounding volcanoes national park aimed at expanding the habitat so as to allow the rare big apes to thrive. It is through the expansion of volcanoes national park that the lives of the endangered gorilla will thrive contributing to the economic expansion. There is great hope for community benefit from tourism evidenced by the already achievements where locale people have greatly benefited from revenue sharing schemes.

Conclusively therefore, the expansion of volcanoes national park is very essential. There is great hope for an increase in gorilla populations as well as increase revenue form gorilla tourism compared to the past decades.