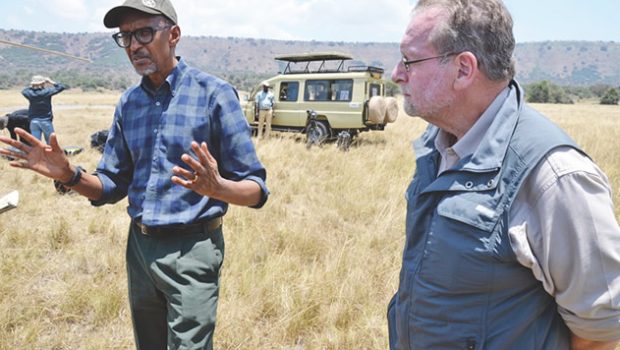 Rwanda of recent hosted a royal tour in which peter Greenburg a renowned travel documentary maker peter Greenberg explored all treasures in Rwanda. Exceptionally, this amazing tour was guided by his excellence Paul Kagame the president of the republic of Rwanda from the start to the end. The president (Paul Kagame) disclosed the gem Rwanda offers which together make the country a distinct tourism destination. Peter Greenburg is a recognized travel editor for CBS who at a specific time explores a specific country purposely to offer viewers reach to amazing places, historic revolutions and cultural related experiences in different countries that they did not know about.

The royal tour was a one-week’s trip in which president Kagame led peter Greenburg to different tourism spots in all parts of the country. The first visited spot was Volcanoes national park a home to the critically mountain gorillas. Here the president and his colleague engaged in the lifetime gorilla tour experience and the most done activity in the land of a thousand hills. The president revealed to peter how Rwanda is a home to 10 habituated gorilla families namely Titus family, Susa group, Karisimbi group, Amahoro group, Umubano group, Sabyinyo group, Agashya group, kwitonda family, Hirwa family, Ugenda group and Bwengye family available for trekking everyday. The president further explained why Rwanda’s gorilla permit is expensive at 1500usd compared to Uganda and Democratic Republic of Congo. According to the president, the need to promote gorilla conservation while benefiting local people at the same time is main reason for a costly permit. Everyday, each gorilla family is visited by a group of eight people for an hour’s interaction.

Also, president Kagame led Greenburg to Nyungwe forest National forest national park a home to the highest population of chimpanzees in Rwanda. While in Nyungwe, Kagame and Greenberg trekked the famous chimpanzees, the close relative to human beings. Still there, travelers enjoyed the eminent canopy walkway rewarding them with an aerial view of the national park, wildlife, Virunga volcanoes and other attractions in the neighboring countries.

From there, kagame guided Peter Greenburg and the group to Akagera national park Rwanda’s only savannah national park and a home to the big five game. Game drives were done and travelers enjoyed great views of herd’s elephants, buffalo’s lions, rhinos, leopards, waterbucks, antelopes, kobs, and impalas among others grazing, browsing and hunting in the open savannahs. Lake Kivu was not left out in the tour and kagame with his counterpart peter Greenberg enjoyed a jet-sky on the lake. Kagame explained the formation of lake Kivu and its existence up to date.

After the tour, peter Greenberg compiled a one-hour documentary showing all the sites they visited with Kagame and details about each site. The new documentary was premiered in Chicago USA on 23rd April 2018. Rwanda’s royal tour documentary is so far the latest edition of the groundbreaking royal tour series documented by Greenberg. On the day of its publication, over 500 people mainly business leaders from Chicago were present which is an added advantage for Rwanda exposing her to the outside world. Also some former united national peacekeeper Rtd Gen Romeo Dallaire, jack Hanna-American zookeeper and director Emeritus of the Columbus zoo and Aquarium plus other members of the Rwandan Community in United States attended the show. Paul kagame and the first lady Jeannette kagame also attended the premiere of Rwanda in the New York.

The release of Rwanda royal tour documentary attracted much attention from all over the world. All ordinary and social media platforms were washed with pictures showing Rwanda’s beauty, the tractions, activities and hospitable people and most of all, the president serving as a guide. Rwanda’s one hour behind the scenes clip was also aired on public broadcasting service (RTV) an American broadcaster and

Rwanda royal tour is the newest version of the royal tour series documented by the travel journalist peter Greenberg. On all royal tours he has conducted, peter Greenberg is always guided by heads of state and government officials on his tour. Kagame live participation and his role as a guide was a surprise to many people showing the president’s great love and support for tourism in his country. Rwandans were excited on seeing their president serve as a something that they never expected. For all royal tours, Greeberg has had, Paul kagame was the first president to serve as a guide, which makes Rwanda royal tour indeed exceptional. With no doubt, the clip is expected to bring a high number of travelers to the land of a thousand hills having known the exceptional experiences the country offers. Since it’s airing, Rwanda royal tour is the most watched programme on Rwanda’s national broadcaster (RBA) watched for all Rwandese as well as on other American television which display other documented by Peter Greenburg, a renowned journalist.

The royal tour revealed the other side of president Paul kagame like charisma, easiness and friendliness, which some people did not know about before. Kagame’s new discovered characters complement his former ones such as sweetie by former British politician Clare short among others.