Having been shaken by the high cost of gorilla safaris in Rwanda after the double increase of gorilla permits last year, Rwanda travel operators have felt a relief after the introduction of 30 percent low season discount permits in volcanoes National park. In 2017, RDB and the government of Rwanda with immediate effect doubled the fees of gorilla permits 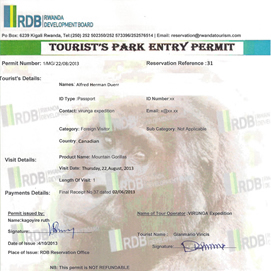 from Rwf650, 640 ($750usd) to (RWf1.3 million ($1500) to be paid by all travelers despite the nationality. The high cost of gorilla tours in Rwanda diverted the most would be Rwanda safaris to neighboring Uganda and Democratic Republic of Congo were gorilla treks are relatively cheap.

The diversion of gorilla tours from Rwanda to Uganda left most travel Rwanda operators jobless and stuck with no incoming inquiries. Since last year, Rwanda Development Board has lost over 60% business to Uganda due to Uganda’s cheap gorilla permits at 600usd each. Also, transferring travelers from Rwanda to Uganda for gorilla has become costly for Rwanda tour operators, which has negatively tourism business. On crossing over the Rwanda Uganda borders, tour operators are obliged to pay extra $20 (Rwf17, 346) to the Uganda Revenue Authority, $30 (Rwf26, 019) for COMESA insurance and fuel charges which end up raising their holiday package quotations by 10 to 20 percent. Also, its unfortunate that some tour operators in Rwanda have not received any inquiry to see gorillas since the increase of gorilla permits in 2017. One tour operator confessed that they have lost many travelers who just pass through Kigali crossing over to Uganda where gorillas are tracked at a cheaper cost.

Since the time of Dian Fossey, gorilla tracking has been the most done tourism activity in Rwanda and the Virunga conservation area bringing in thousands of travelers from all parts of the world. The high cost of a gorilla permit in Rwanda was a big blow for gorilla tourism in Rwanda hindering some travelers especially those traveling on budget from enjoying this lifetime experience.

To encourage more gorilla safaris in Rwanda, Rwanda development board has introduced 30% discount on gorilla permits, which is a relief to travel operators. Permits reducing the With the new discount, tour operators are to pay Rwf911, 076 ($1,050) between November and May which is expected to attract more travelers.

Why was gorilla permit cost increased?
Many people were left wondering why and how would Rwanda Development Board charge that expensive for a single permit. Complaints were forwarded to the government but could not change its mind having its core reasons for the increase. The major aim of increased gorilla permit cost in Rwanda was to transform Rwanda into a high-end tourism destination while promoting mountain gorilla 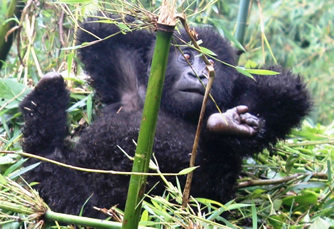 conservation by reducing the number of visitors to gorilla’s everyday. Mountain gorillas are critically endangered species suspicious to human diseases especially communicable diseases, which promote conservation by reducing the number of gorilla visitors while maintaining revenues according to the chief tourism officer at the Rwanda Development Board (RDB).

To spend an hour with mountain gorillas in Rwanda, travelers pay $1,500 for a permit with out which no one is allowed to trek gorillas. On the other hand, travelers to Uganda pay relatively low cost 600usd for a permit while gorillas in democratic republic of Congo are much cheaper costing & 400.
Since gorilla permit cost increase in Rwanda, the country has also seen a slight decrease in the revenues earned from the sale of gorilla permits, which has also slowed down some developments in the country.

With the offered discount, travel operators expect an increase in new inquiries, which will boom their business again. Also, there is hope for increased safaris to Akagera national park and Nyungwe forest national park will generally promote tourism in the land of a thousand hills.
Gorilla trekking is one of the top tourism activities in Rwanda and is a focus for most if not all travelers to the land of a thousand hills.

In general, mountain gorilla trekking is a best wildlife experience which every travel should not miss out on his/her Rwanda safari. A discounted gorilla permit in volcanoes national park is surely good news for Rwanda travel operators and travelers giving them a chance to interact with these magnificent experience.