The night of 5th October 2019 was a nightmare in Kinigi village suburb of Volcanoes National park when believed to be Hutu rebels attacked Kinigi village leaving 8 people dead and 18 critically endangered. Rebels raided local homes with pangas, knives, and guns. 6 people were killed by traditional merchants (pangas, and knives) while 2 people were shot dead. However, Rwanda is still safe and the best place to visit for gorilla safaris in Africa. Thanks to Rwanda police and all security agencies that responded immediately, harmonizing the situation and deterring the attack. Kinigi is a gateway to Volcanoes National park located in the Musanze district in northwestern Rwanda at the borders of Rwanda and the Democratic Republic of Congo. So far, 19 terrorists linked to the attack have been killed which put the situation in Rwanda back to normal.

But who are rebels in Rwanda?
Most people are still wondering who these rebels to Rwanda are. Well, its believed that a group of Hutu against the current rule of President Paul Kagame are the rebels to Rwanda. Hutu minorities who fled Rwanda running away from justice after taking part in the 1994 Rwanda genocide which claimed the lives of millions of innocent people within 100 days. The rebels dwell in the eastern jungle of the Democratic Republic of Congo. 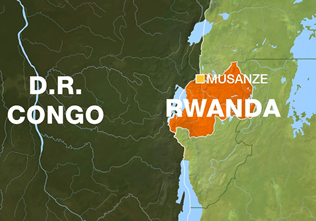 The last rebel attack in Rwanda was in December 2018. Since the 1994 Rwanda genocide, some Hutus became rebellious against policies put by the resigning government. For overtime, Volcanoes National park, home to the endangered mountain gorillas has been a target for Rwandan Hutu rebels within the Democratic Republic of Congo.

Tourism in Volcanoes National park
Volcanoes National park, situated in northwestern Rwanda is the most visited tourist destination in Rwanda. The park is home to the highest population of mountain gorillas in the Virunga conservation hence the first stop center for Rwanda gorilla safari. 10 gorilla families have been habituated in the park hence 8 visitors allowed to see Rwanda gorillas each day. Since 2017, Rwanda upgraded into a luxury tourism destination following the double increase of her gorilla permit prices from $750 to $1500 paid by all people. The nearness of volcanoes national park to Kigali International airport makes it the most accessible gorilla national park in the world. The major reason for the double increment of gorilla permit prices in Rwanda was to limit the number of travelers to see gorillas, promote gorilla conservation and support the livelihood of local people adjacent to this park.

Besides gorillas, Volcanoes National park is home to the endangered golden monkeys. 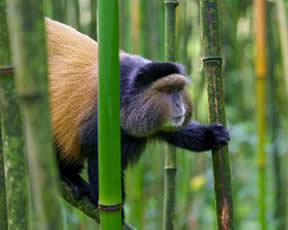 It’s undeniable that golden monkey trekking is the second most done in Rwanda after mountain gorillas. Fortunately, a golden monkey permit costs $100 that is quite cheap and affordable compared to gorillas. The other populations of golden monkeys live in Uganda’s Mgahinga Gorilla National park. Golden monkeys are lively and playful creatures whose company you can fail to enjoy.

Still in Volcanoes National park, hike to the graveyard of Dian Fossey, an American primatologist who lost her life to save the endangered gorillas that were on the verge of extinction to the poachers. Dian Fossey camped at Karisoke and launched a campaign against poaching, spreading the gospel of gorilla conservation in the Virunga massif. Unfortunately, Dian Fossey was attacked at her camp and killed by heartless rebels but her campaign continued and it has seen the number of mountain gorilla’s increase in the Virunga Conservation area. The Dian Fossey grave yard hike is a sign of love and commemoration for this gorilla lady.

In addition, Volcanoes National park is a center for Rwanda hiking tours. The park shelters Mt Karisimbi, the highest Volcano in the Virunga conservation area, and Mt Bisoke offering you the best hiking experiences in Rwanda. A hike to the summit of any volcano offers you a great view of the park, local communities and other Virunga volcano ranges in Uganda and the Democratic Republic of Congo. Also, the slopes of these volcanoes shelter mountain gorillas and other primates that you stand high chances of seeing.

Also, visit the twin lakes of Bulera and Buhondo for a boat cruise and cool breezes. A boat ride with local people going to their gardens makes you feel at home a part of Rwanda’s traditions.

A city tour through Kigali is a must-do for everyone on a Rwanda safari. The cleanness, quietness, and ambiance of Kigali city give you a fresh feeling. The small city is ranked as the cleanest city in Africa. While there, pay a visit to the Kigali genocide memorial center, art galleries, Kigali convention center, the presidential palace, and local markets for shopping.

Rwanda still remains one of the safest travel destinations in the world. Thanks to the government and security agencies for promoting peace, safety, and security of all people and businesses in Rwanda.