On 6th September 2019, all roads in Rwanda led to Kinigi for the 15th gorilla naming ceremony at the headquarters of Volcanoes National park home to quarters of the world’s surviving endangered mountain gorillas. Thousands of travelers, conservationists, celebrities, local people, researchers, soccer legends, mountain gorilla lovers and those in show businesses were seen flocking to the scene. It was magical, seeing 25 baby gorillas being given names by different prominent people from all over the world. The baby gorillas were those born in late 2018 and since the stet of 2019 and the number totaled to 25 from different gorilla families in Volcanoes National park. HE Paul Kagame, the reigning president of Rwanda who was the guest of honor, officially opened the colorful day. Also. series of local and international entertainments were performed to celebrate this utmost value given to endangered gorillas, which they undeniably deserve. 25 people both from Rwanda and outside countries were selected to give the baby gorillas names. Each person named one baby gorilla. The name given to baby gorillas was in Kinyarwanda with a unique meaning for future hope, location, wishes, and expectations. The names of baby gorillas at 2019 Kwita Izina and people who named them are:

Ingando: Born in Isimbi gorilla family, baby Ingando was named by Jeremy Jauncey, the founder of beautiful destinations and advocate for conservation. Ingando translates to mean hope and a chance for sustainable tourism in Rwanda and the whole globe.

Baby gorilla with its mum

Isanzure: The baby gorilla was born in Amahoro family and was named by Madeleine Nyiratuza, the one in charge for the conservation and restoration of Gishwati Muhkura forest reserve, Rwanda’s new national park. “Isanzure” means that mountain gorillas should roam freely with no disruption.

Igihango: Born in Sabynyo gorilla family, Igihango baby gorilla was named by Ron Adams who is the first Israel residence ambassador to Rwanda. “Igihango” is a covenant symbolizing a connection between God and Humans and a strong bond between gorillas and their guardians. 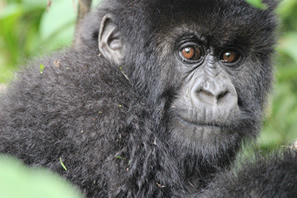 Irembo: Named by Niklas Adalberth, he founder of Norrsken Foundation, Irembo baby gorilla was named to symbolism the doorway that Norrsken foundation is creating for Rwanda entrepreneurs for their innovations that will lead to a better world.

Inkorumutima: The bay gorillas was born in Musirikare family and named after “Inoramutima” a prominent singer with popular songs in Rwanda. Meddy named the baby gorilla an artist from Rwanda.

Kira: Translated as “bless you” Kira baby gorilla was named by Ota Gunewardene after her two lovely sons i.e Kiran and Rakhi. Otara is a founder of Otara foundations and also a philanthropist.

Ingogozi: Louis Van Gaal, the Dutch former football manager and player, named the baby gorilla as respect for peace and remarkable recovery that Rwanda has made to become one of the peaceful countries in the world since 1994.

Umukuru: This baby gorilla was born in Pablo gorilla family and was named by Haile Mariam Desalegn Boshe, the former prime minister of Ethiopia. Umukuru name was selected as a tribute to Mutware, the oldest elephant that died in 2018 in Akagera National Park.

Intego: the baby gorilla from Kwitonda was named by Ronan Donovan and Ingego means purpose.

Mugwire: This baby gorilla was named by Emmanuel Niringiyimana an exemplary young Rwandan man Emmanuel constructed a road on his own to facilitate movements of people and goods in hi community, something that made him an exception.

Uruti: Translated as the highest recognition of heroism, Uruti baby gorilla was born from Igisha gorilla family and named by Dame Louise Martin, DBE, the president of the common wealth games Federation joined by Patricia Scotland.

Intarutwa: Intarutwa baby gorilla was named born from Muhoza family and named by Naomi Campbell who works as a businesswoman, international supermodel and humanitarian. Intaruwa is translated as “excellence”.

Karame: Born from Korea family, Karame baby gorilla was named by Anthony Nzuki, an exceptional ranger at Akagera National park, the only game park in Rwanda and home to the big five games.

Ituze: Ituze baby gorilla is born from Sabyinyo gorilla family and managed by Wilfred Kiboro an entrepreneur and Philanthropist in Kenya. Ituze is translated as stability in Rwanda while in Swahili; it means “Take Care”.

Igonga: Translated as courage, Igongo baby gorilla was born from Umubano gorilla family and named by Amina Mohammed, the former federal Minister of Environment of Nigeria and the Deputy secretary-general for the United Nations.

Umwihariko: The baby gorilla was born from Ntambara gorilla family and named by Karen Chalyan, the ambassador of the Russian Federation to Rwanda. Umwihariko means “exception”.

Biracyaza: Named by Ne-Yo, the Grammy award winning singer and songwriter. Biracyza baby gorilla was born from Kuryama family. The name s translated as “ great things are coming”. For Ne-Yo, 2019 gorilla naming ceremony was his first trip to Rwanda.

Generally, a Rwanda gorilla trio to Volcanoes National park will give you a chance to meet any of the recently named baby gorillas. Contact Gorilla Trek Africa today, book a gorilla safari to Rwanda and enjoy a once in lifetime experience with the endangered species in the jungle.