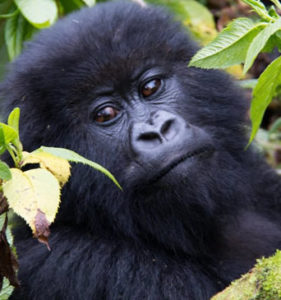 This is the most interest by many travelers to the national park. Virunga national park in DRC along with Rwanda’s volcanoes national and Mgahinga gorilla national park and Bwindi impenetrable forest national park in Uganda are the only destinations where the world’s endangered mountain gorillas dwell.
Trekking in Virungas was at first disrupted by civil wars caused by the M23 rebels who occupied the Mikeno area of the national killing many mountain gorillas putting tourism to a stand still.
Presently, political situation is stable and peace recovered hence encouraging peaceful and enjoyable gorilla tourism safaris. There are 6 gorilla families that have been habituated for trekking in the Virunga national park at a cost of 450usd for a single gorilla permit.

Just like in other gorilla destinations, a group of eight people is allowed to trek the gorillas for an hour after which they count the trek done. Also, trekkers are given masks, which they must put on the mouth and nose to ensure safety of the gorillas from human wildlife diseases. A trekking permit is a must have for every trekker without which travelers are not allowed to interact with the mountain gorillas. Interestingly, the low cost of the gorilla permit in the DRC make it cheap to trek there compared to neighboring Uganda or Rwanda at a cost of 600usd and 700usd respectively.

A hike on Mount Nyiragongo 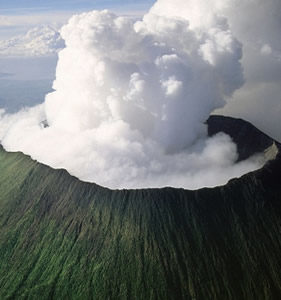 Its yet an interesting sport in Virunga national park. Nyiragongo is a beautiful strata volcano situated with in the heart of the national park together with the sister volcano named Nyamuragira. The summit of the volcano hosts the world’s largest lava lake with hot gases exploding up with bubbling fumes. Kibati patrol post is a starting point for hiking and all must me there by 10:00am. Any delay to reach the starting point leads to cancellation and travelers are no refund is given with neither a refund nor allowed to hike alone.
Hiking time ranges from 4-6 hours depending on the speed and the physical fitness of the hikers. Once at the summit, travelers are always happy while peering down into the Chunning Lake. Hiking is quite steep starting at 1989m and ending at 3470m hence requiring travelers to have walking sticks, enough drinking water, energy supplements and hiking boots for ascending and descending. Warm jackets are also recommended since all the seating and hotness disappear into extreme coldness at the summit.
The slopes of the volcano are covered by forests, which harbor various animals, which include forest elephants, chimpanzees, giraffes and buffalos among others. This therefore assures travelers of meeting various animals while hiking the volcano. 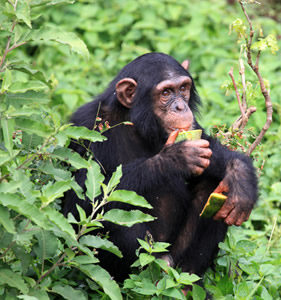 This is a newly introduced tourism activity in the Virunga national park. Trekking began in 2014 when a group of people was trained by a Frankfurt zoological society on how to habituate chimpanzees in the forests near the national park headquarters.

Concerning when to visit Virunga national park, the dry season is the best time to visit the park especially for mountain gorilla trekkers. However the park can be visited all year round and all activities can be done at any time of the year.

Conclusively therefore, a safari to Virunga national park is a lifetime experience that every traveler should enjoy.