DR Congo Tourism Now Looks to Kahuzi-Biega
Following the closure of Virunga, Africa’s oldest national park till 2019, all gorilla safaris to Congo have diverted to Kahuzi Biega national park. Virunga national park in Eastern Democratic Republic of Congo (DRC) was closed in May 2018 due to insecurity concerns associated with kidnap and killing of park rangers. The good news is that Kahuzi-Biega national park has got the potential and it is the closest best alternative to the entangled Virunga given the presence of the unique and endangered lowland Eastern mountain gorillas in the park substituting Virunga’s mountain gorillas and this should keep your Congo gorilla Safari running.

Kahuzi-Biega national park is well endowed with wildlife including 136 species of mammals with the Eastern lowland gorilla being the most prominent of all. Due to the constant threat to these endangered primates, the park authorities have worked tirelessly to protect them and other remaining mammals by beefing up the park security and other measures like community sensitization to control poaching which has proved to be the greatest threat these animals are facing in the previous decades. 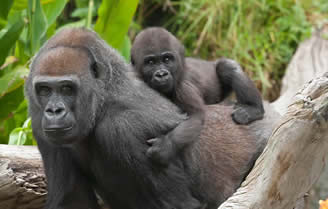 and visitors can come here to witness and associate with these rare species from their habitat together with other primates that also reside in the same home including the Eastern Chimpanzee, the colobine and owl-faced monkeys. Other prominent mammals in the park that are also worthy visiting include; bush elephant, bush buffalo, hylochere and bongo. Others are aquatic civet, eastern needle-clawed galago, maclaud’s horseshoe bat, Rwenzori least otter shrew and Alexander’s bush squirrel.

Those who would like to visit Kahuzi-Biega national park should be assured that though the park has been to a less extent affected by illegal activities like poaching, the security situation remains calm and the tourist environment is really conducive. The park officials are optimistic that tourism will continue to thrive in the park given that they have put in place adequate security measures including training and deploying more rangers to bolster security.

Other tourist activities in the park
After your incredible lowland gorilla tracking experience, Kahuzi-Biega has got more exciting activities packages to offer you before you conclude your Congo wildlife Safari. These include the following;

Volcano Hiking
There are two inactive volcanoes to hike within the park; mount Kahuzi with the summit of 3,308m above seal level and mount Biega, which is 2,790m high. These two summits provide you with an excellent view of the whole park and the neighboring communities at large. You will also be able to see the magnificent
Bamboo and subalpine vegetation as you hike through the slopes of the volcanoes.

Birding
This is another popular activity in the park given the presence of over 350 bird species of which 42 are endemic to this park. The most spotted ones include the African green broad bill, yellow crested helmet –shrike, the Congo peafowl and Rockefeller’s.

Nature walks
There are various walking trails through the tropical rainforest to different tourism sites. The Tshibiti waterfalls trails lead you to three waterfalls in the park. Along the trails, experienced guide will show you different vegetation types and other wildlife species in the park. Fresh air accompanied by sweet sounds of the singing birds in the forest make you desire that your forest walk last longer.

With all the beauty and the tourism potentials that Kahuzi-Biega national park boasts ranging from the awesome Eastern lowland gorillas to different primate species, we believe the park is an awesome alternative to the closed Virunga national park and there should be no reason to cancel your dream Congo safari.