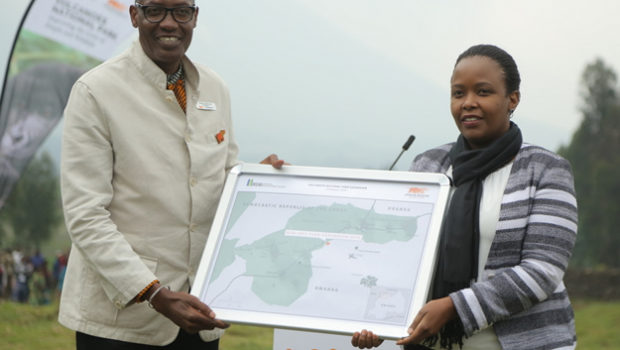 In support of the on going efforts to expand the land area for volcanoes national park a home to the critically endangered mountain gorillas, the African Wild Foundation (AWF) a conservation body in Rwanda on 10th January 2018 handed over 27 hectares of land to expand the habitat of mountain gorillas. African Wildlife Foundation is the largest pan-African international conservation organization, which aims to ensure the survival of wildlife and wild lands in modern Africa. Its now four decades since AWF started supporting Rwanda’s mountain gorillas and it operations run in sixteen countries in sub-Saharan Africa. The newly added 27 hectares add up on the current size of volcanoes national park, which is 16,000 hectares and is located in the out skirts of the park. With an expansion of gorilla habitat, Rwanda expect an increased number of gorillas safaris to Volcanoes National park and other related activities in the park.The hand over took place in Musanze district on 10th January 2018 and is a great achievement for the Rwanda Development Board giving mountain gorillas enough habitats as well as other wildlife and birdlife that seek refuge in volcanoes national park. The land was donated at the closing of the event that was held in kinigi sector at the edge of volcanoes national park, which attracted several conservationists, government officials, members of diplomatic corps and a high number of local residents.

Regarding gorilla tourism’s economic value to Rwanda, the sector has brought in over $107 million to the national coffers from the gorilla conservation programs. Still in the event, Benjamin Mkapa a former Tanzania President recognized Rwanda’s unwavering commitment to conservation. Its so evident that Rwanda’s government has stood firm to conserve wildlife despite various challenges such as poaching and human encroachment among others. Similarly Paul kagame was also recognized for his good leadership, which has boosted economic growth, infrastructure development and protecting the environment at the same time.

African Wildlife Foundation is a founder of the mountain gorilla project, the international gorilla conservation program (IGCP) as well as pioneering the community ownership of high-end ecotourism lodges such as sabyinyo silverback lodge. The lodge has so far generated over US$2.9 million to local communities since its establishment in 2007. The conservation efforts with the help of the government and other stake holders has increased the population of mountain gorillas from 285 in 1978 to over 400 in 2010. An increase in the population of mountain gorillas has attracted a high number of travelers over the years. Over 220,000 travelers have visited volcanoes national park and the number has increased 82% since 2007 hence an increased demand for mountain gorilla permits.

Rwanda has considered gorilla tracking and conservation as a first priority and this has significantly contributed to sustainable tourism and economic development in all parts of the country. Rwanda’s vision 2050 greatly base on “green growth” as a core component.

Also, the country has distinguished herself as a leader in conservation following the remarkable ape recovery and its one of the reason why AWF has donated the land to Rwanda to expand the habitat for the steadily increasing population of mountain gorillas. African Wildlife Foundation also pledged to support Rwanda development board in all ways s as to promote gorilla tourism and support the increase of mountain gorillas inn volcanoes national par and other wildlife in other national parks all over Rwanda. Rwanda is one of the three countries that shelter the critically endangered mountain gorillas alongside Uganda and Democratic Republic of Congo.

Conclusively therefore, the expansion of volcanoes national park is a great achievement in Rwanda that will support the increase of mountain gorillas in the park as well as promoting gorilla tourism in the country.