A rwanda safari without a tour to Musanze caves is undeniably incomplete. Situated in the heart of Volcanoes national park north western Rwanda, Musanze caves are surely worth visiting. Musanze caves were officially recognized as tourism products in Rwanda in 2013 and have since then become a must visit in Rwanda for a complete safari package. While on your Rwanda gorilla tour in Volcanoes national park, spare some time and visit Musanze Caves two kilometers long underneath. Rwanda tours to Musanze caves were introduced to market in 2013 by Rwanda Development Board(RDB) to diversify tourism products in this land of a thousand hills. 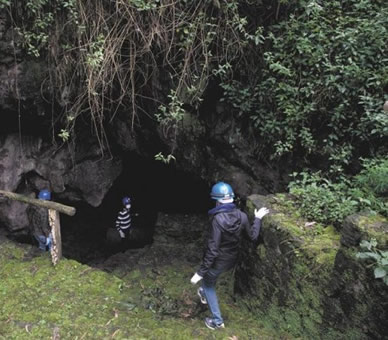 Rwanda Development The caves can be sited north of the country in Musanze District, the site has had a major facelift with establishment of tourist walkways, trails and stairs that take you to the dark interior of the caves that illustrates a picture of a house with several rooms and corridors. The floor is paved and there are some stairs to ease movement.

Visit the volcanic region of Rwanda to sight the Caves believed to be as a result of volcanic eruption decades ago that offer an in-depth understanding of the geological and geographical historical development of the globe. Musanze cave can be explored after gorilla tracking in Volcanoes national park in case you will have time. The place is located on the foothills of Volcanoes national park, meaning that you can easily visit this place after gorilla tracking in the evening hours.

Adventure other spectacular sites and views of the nearby areas including the Buhanga Eco-park known for coronation of Rwandan former kings, the panoramic view of the twin lakes namely Burera and Ruhondo, Karisimbi Volcano climbing, Bisoke Volcano climbing, trek to Dian Fossey grave, golden monkeys trekking and the famous mountain gorillas trekking.