Arsenal Football Club and Brazilian defender David Luiz has added his name to the list of lucky travelers who have had a chance to experience one of the greatest wildlife experiences in the world of trekking the endangered mountain gorillas in Rwanda.

Luiz’s trip to Rwanda was part of the Visit Rwanda groundbreaking partnership with English football club Arsenal. The deal between the two parties also includes a focus on football development where the club partners Rwanda Football Federation and the National Ministry of Sports and culture to develop and nurture football talent in Rwanda for both boys and girls.

In his 2-day trip, Luiz experienced Rwanda’s famous hospitality, learned about the country’s rich culture and natural wonders. He also had a chance to learn how Rwandans have managed to put behind their dark history and unite to drive the country forward making it one of the fastest-growing economies in Africa.

How Luiz spent his 2-day visit in Rwanda

Luiz was accompanied by his fiancé and his mother and the three began their trip by visiting the Kigali Genocide Memorial where they paid respects to the victims of the 1994 genocide against the Tutsi.

While at the memorial, Luiz and his company were taught about the causes of the genocide and how the people of Rwanda have overcome the negative effects of the tragedy to build a new nation on the foundation of dignity and togetherness. They laid a wreath and observed a moment of silence in honor of the victims. 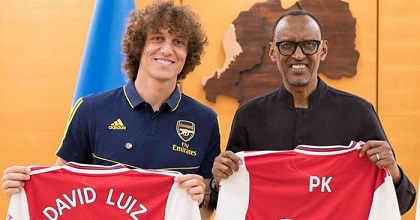 Still in the first day of his trip, Luiz went on to meet the President of Rwanda, H.E. Paul Kagame before heading northwards where they were received at Singita Kwitonda Lodge. David planted an indigenous tree as part of the campaign to reforest the area around the habitat of the endangered mountain gorillas, Volcanoes National Park. 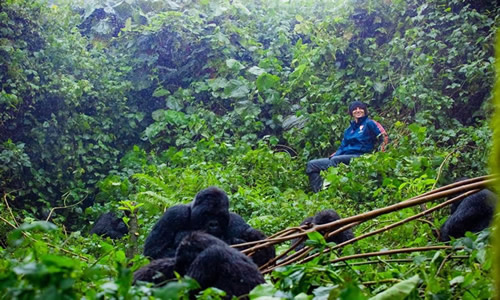 Luiz and his family kicked off day 2 by entering the mist of Volcanoes National Park to trek mountain gorillas. As usual, meeting these incredible and large primates in their natural habitat is just second to none in the wild and the story was not any different with the Brazilian and his family.

During this breathtaking experience, they learned about the country’s successful conservation efforts to protect the gorillas and their habitat while they were also told about other wildlife experiences in the park and in the country at large.

In the evening, David moved back to the capital Kigali where he attended a national league football match at Kigali Regional Stadium where he also met players, academy players from the Irebero Goalkeeper Training Center and fans.

Meet and greet with fans at Kigali Convention Center 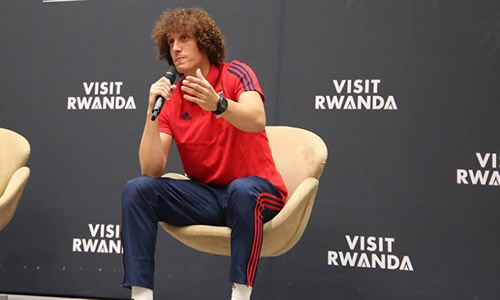 The defender concluded his trip by meeting hundreds of Arsenal fans at Kigali Convention Center where he interacted with them about his experience in Rwanda, his life and football career in a question-and-answer session

The 32-year old defender praised the welcoming spirit of the people of Rwanda, the nature and he loved everything he saw in the Land of a Thousand Hills.

“It has been incredible to learn about this wonderful country and experiencing the welcoming spirit of the Rwandan people. I came with the curiosity to learn about the country, considering what it went through 25 years ago. I have to say that I was inspired by how fast it has moved forward and how it has become a progressive, fast-growing nation with so many amazing things to see and do”, said Luiz.

“My family and I are so thankful for the opportunity to come here and see the passion of football fans, experience Rwanda’s culture and witness breathtaking scenery. From trekking to see mountain gorillas to watching local football and mixing with fans of all ages, it has been a humbling and wonderful experience. We can’t wait to come back and see even more of this beautiful country. I’m going to recommend all my friends to spend their holidays in Rwanda”, he added.