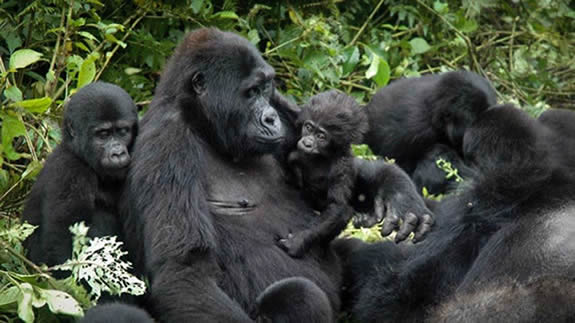 Just like humans, mountain gorillas also live in social groups or families that are made up of those animals that are closely related, no wonder these apes share about 98% of the human DNA. This behavior is the same in all the two communities where mountain gorillas live, that is, in Virunga Mountains of Rwanda, DR Congo, and Uganda and in Bwindi Impenetrable Forest National Park in Uganda.

Majority of the gorillas in each group are females

Apart from a few exceptions, mountain gorilla groups are dominated by adult females in terms of numbers. In fact, a typical gorilla family is made of one dominant adult male (Silverback) with multiple adult females and their young ones.

On rare occasions, some gorilla groups have been found to have up to 8 silverbacks with each playing a different role in the hierarchy. All the other males in the group recognize and submit to the leading silverback and when one of them is tired of being contained, they eventually leave and form their own or join other bachelor silverbacks.

Secondly, males can decide to leave their natal group in order to create their own families. Such males usually steal a few females from other groups and if they fail, they continue to roam around alone until they manage to convince the females to join them.

The last option is for these males to either form or join a bachelor group which is made up of other silverbacks that have been unsuccessful in getting females or are in the process of searching for them. While in the bachelor group, these males acquire skills that help them to become successful leaders once they form their own families. There is still a form of hierarchy even in the bachelor group with a leader and subordinates just like the case with other normal groups with a dominant silverback and females.

Even female gorillas do leave their natal group

Some gorilla females may even switch several groups multiple times in their lives hence having offspring with several males from different groups.

Each group has a hierarchy among males though there is also some form of hierarchy among females. Among males, one dominant silverback takes decisions for the entire group including deciding to eat or sleep while other males in the group take on other responsibilities like security and handling conflicts. Among females, their hierarchy is not well structured like that of males. Sometimes a female may rise in hierarchy based on age, time spent in the group with the newcomers usually the lowest in the hierarchy. A female’s status in the group could also rise if the dominant silverback picks interest in her. The offspring factor may also lead to rise in the status of a female where those with newborns likely to rise in rank.

Amazingly the number of mountain gorillas found in each group may vary from 2 to 65! Although the average number of gorillas in a single group is 10-12 individuals, some groups have been found to have as few as a couple of two breeding gorillas or two bachelor silverbacks while others are so large with up to 65 individuals. Pablo’s group broke the record to rise up to 65 individuals when it was still under the leadership of the legendary Cantsbee though the numbers have gone down since his passing. Some of the members of the group have been stolen by silverbacks who spit away to start their own groups.